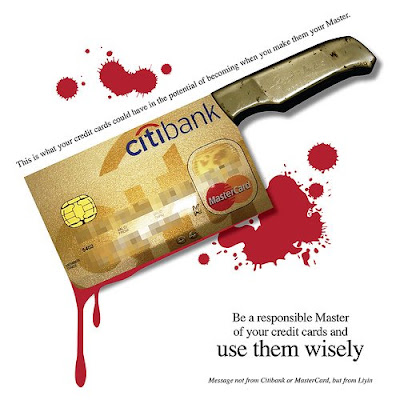 For years, I (and finally a few members of government) have been railing against the credit card companies/banks and their obviously abusive policies regarding overlimit fees, payment fees and interest rates. Finally, we have a president and Congress willing to act upon the years of blatant disregard for consumer rights. Tuesday, a bill was passed by the senate that will regulate the massive credit industry in the United States. What does this mean to average credit users? (and certainly there are credit abusers as well) Consumer Reports, a trusted source of consumer info for decades, has provided an easy to digest list of reforms that may benefit you. Here is the pilfered list with all credit due to CR:

•Interest rates can’t be raised during the first year of an account
•Customers will be notified 45 days in advance of any change in interest rates
•Bills can be paid online or over the phone without incurring a processing fee
•Customers must be over 60 days late on payments before their interest rate can be raised on balances; if the rate is raised, it will go back to the lower rate if customers make the minimum payment on time for six months in a row.
•Overlimit fees can’t be charged unless cardholders are told that the purchase will put them over their limit and they authorize it to go through anyway
•If your card has more than one interest rate on balances, then payments must be applied to the highest interest rate first
•Gift cards can’t expire for five years, and issuers can’t charge dormancy fees for unused amounts left on the card
•Credit card statements must be mailed out 21 days before they’re due
•Individuals under 21 will need a co-signer on their cards unless they can prove that they have the means to make payments on their own
•Credit card agreements will have to be posted on the internet

Most notable here are the efforts to curb outrageous interest hikes (some for simply making ONE late payment) and the fees charged for overlimits and making payments (yes, charge your customers for paying their bills, that was always a great idea). This means that Master Card debit/credit cards will no longer be allowed to extend your credit by approving purchases that go over your limit without your knowledge/consent AND more perhaps more importantly, you can avoid the $30-$60 overlimit fees. I would have gone further to ban the over limit purchases all together, but that's just me.

Keep in mind, the protection against “retroactive” rate increases do not include cardholders who have made payments that are more than 30 days late in the previous year. This unfortunately includes more than 10 million Americans who may need this legislation the most. (NCLC)

Hopefully, this is the tip of the iceberg in securing consumer rights in a capitalist system that obviously thrives on wasteful spending and then abuses most of those who spend. Consumers must practice restraint and responsibility in spending, but I see increasing difficulty in young people's ability to do so considering the status and prestige assigned to the products/services they are almost required to buy in our society. I still feel that there should be a department of consumer affairs in the president's cabinet to represent the people/consumers instead of the current agencies that seem to only represent the interests of the American business; but that's another story.

Also, I'm not impressed with the loaded weapons in national parks rider attached to the bill. Riders (A clause, usually having little relevance to the main issue, that is added to a legislative bill) in general, are a bad deal and a stain on our democracy.
(via Consumer Reports and the pic by Liyin)
Posted by AVW at 9:05 AM

"Consumers must practice restraint and responsibility in spending..."

That is key. Personally, if I enter into an agreement, and say I am going to make payments on time...and then I fail to meet that agreement, said company has every right to increase my interest rate, and charge me a fee. I personally have no problem with that.

If you can't make the payment, don't buy the toys. "Needing" to buy something to fit in with the other kids, doesn't fly in my book.

What i do think is great is the fact that payments will be going to the higher rate FIRST... that is a sneaky trick that the CC companies use.

of course, if you have a balance at 12% and then transfer over something at 0%... you are basically screwed. No way to pay off that 12% balance, until the new transfer is done.

great post...thanks for the info!

Justin, thanks for another insightful comment. In general, I agree with you and I definitely think that there should be consequences/fees for customer mistakes/credit abuse, but they must be clear as to why they're given and they must be fair (i.e. not charging you $60 for an overlimit or $5 to $15 for a payment). I think you nailed several of the issues with the word "sneaky", many of the rules are designed to trap people it makes a customer mistakes way too costly. The problem is that most people are stupid and don't even attempt to read the fine print, but to be fair, these policies aren't very clear or accessible. Anyway, keep em coming and keep on reading.

I believe most people know this... but if you made an "oops" and got hit with a late payment, typically a phone call will smooth things over.

As long as you are in good standing, 90% of the time, they will waive the fee.

Can't hurt to call :) Actually that is good advice, even for "legitimate" (non-late) fees. You wouldn't believe how much stuff I get out of paying, just by politely asking them to waive it for me.

True, I've gotten out of a few late charges myself. Though, to be fair, lately, I've not endured financial hardships (however, you could argue teaching is constant poverty) and not been able to make payments. While it may say so somewhere in the legal fineprint when one signs a cc agreement, I have a big problem with their ability to raise interest rates to the point where someone's payment barely affects the principal balance owed after missing a payment (or two) or a few late payments. It is clear, that not everyone is as handsome as us, Justin and some people may have to actually pay late charges or overlimit fees or interest rate hikes. I guess the bottom line is that if everyone were in good financial standing, the CC companies wouldn't make much money. Under this new legislation, they still will because people will always miss payments and go overlimits, but the consequences won't be quite so drastic or crippling financially. Keep in mind, I'm definitely not trying to give people a free pass.. just a fair chance.

So this is what it's like to have meaningful conversation through the blog. It's about time.
Thanks again.