THE PACIFIC: AN UPCOMING HBO MINI-SERIES

HBO recently released the trailer for their second World War II mini-series entitled The Pacific, due out in March of 2010. It is already touted as the greatest and most expensive TV show to date with ten 60 minute episodes already completed at a rumored cost of 200 million. Executive producer Tom Hanks had this to say about the "spiritual sequel" to Band of Brothers:
"That’s having its score finalized. I think it’s going to be March 2010. We are able to visit the home front on this one and we’re able to show the guys before the War and after. We show some of the most vicious stuff I’ve ever seen on film - because it has to be."

The trailer itself seems to follow the format of Band of Brothers in that it will follow a cast of characters through a single company of men. This time however, we will get a more complete story of each of these men including life on the homefront during the war. Surely, the issue of racism and miscommunication (on both sides), and the major "island hopping" battles will be addressed and hopefully, the firebombings and dropping of the atomic bomb also. For real footage of the Pacific theatre of battles, check the color (yes, color) footage in Ken Burns' The War.

The picture below was taken on set and like Band of Brothers, is painstakingly true to the appearance of soldiers (on both sides) in WWII. History nerds rejoice.

(via The Pacific Fanpage) 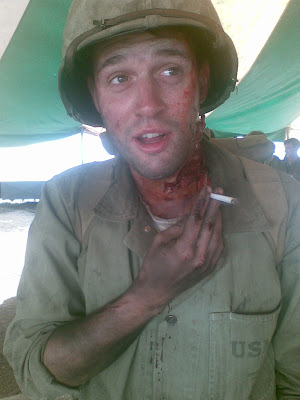