Most Americans are under the impression that we are part of the technological leadership of the world or at the very least, that we have access to this technology. Since we don't often see how our competitors live, who can blame us? Every now and again, we get a reminder that we are no longer the tech kings of the world. (we're pretty good though) Well, new research by Strategy Analytics has concluded that based on household broadband usage (or penetration as it's known), the U.S. now ranks 20th in the world. First on the list is South Korea with 95% of its households using broadband internet access followed by three other Asian nations in the top ten which does not include Japan, (number 16) a country typically thought of as very tech-accessible. (full list below)

When Barack Obama spoke a few months ago about getting America "back on track" he mentioned a study that ranked the U.S. 13th in the world in broadband penetration per capita. That research can be misleading however according to Strategy Analysis:
“In far too many cases, people are looking at the wrong things,” says Ben Piper, Director of the Strategy Analytics Multiplay Market Dynamics service. “Residential broadband is overwhelmingly consumed on a household basis—not individually. Reporting broadband penetration on a per-capita basis misses the mark, and can provide grossly misleading results.”

The significance of this report is not necessarily that America lags behind it's competitors in tech access (which is important in and of itself), but that this lack of technological access could effect our ability to compete in education. According to the Programme for International Student Assessment, the United States does NOT rank in the world's top 20 in any of the three educational categories: Mathematics, Science and Reading. However, almost every country in the top five in these categories also placed in the top ten in broadband use. They are South Korea, Taiwan, Finland, Hong Kong, Canada, the Netherlands, and Estonia. South Korea, perhaps not surprisingly, is #1 in broadband access and reading worldwide. Each of these countries use computers as a cornerstone in their educational systems, President Clinton also shared this view, but we have struggled as of late to keep up. Part of the reason why students internationally score higher than US students is that they spend more time in school, but we could challenge these countries by virtually increasing students educational time with more computer access at home and computer-based learning communities outside of the classroom. This is one of the reasons why broadband access is so important and consequently, one of the reasons why Obama has provided 7 billion dollars to increase this access. There are several ways our educational system has to change to compete, but one of the first steps is to provide the access to the tools we need to so. 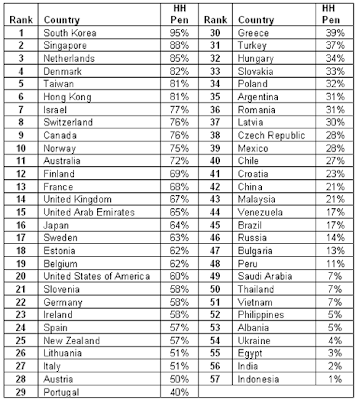