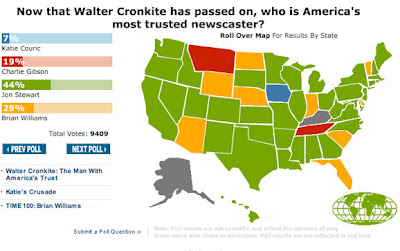 In a new poll by Time Magazine, Americans were asked "Now that Walter Cronkite has passed on, who is America's most trusted newscaster?" Surprisingly, or perhaps not, the Daily Show's Jon Stewart beat out newscasters from the major networks marking a significant change in the perception of previously trusted news sources. Considering the legacy of American television journalism, it certainly is odd, a joke maybe, that a comedian is percieved as more trustworthy than actual news source anchors. (no matter how awesome he is) Therefore this poll appears to be a rather sad reflection on the state of American journalism today, especially considering the recent growth of entertainment news and a shift from journalists like Cronkite (who did much of his own research and writing) to news casters who do little other than look good (sometimes) and read teleprompters. Now, Jon Stewart isn't even a "newscaster" in the typical sense, (or at all) but he does much of own research and writing and his viewers are consistently the most informed compared to every source of news available. (according to Pew Research, see below) So it may be fair to say that Stewart is upholding at least a few of the grand journalistic tradtions that Cronkite helped establish, even if it is for the sake of entertainment. (which is what Stewart has openly stated is his job, not reporting news)

It must be said, that the poll, conducted online, is clearly missing a few notable Fox and CNN anchors, Anderson Cooper, Wolf Blitzer, Bill O'Reilly, Chris Wallace, etc. As of right now, I don't know if the available choices were chosen based on popularity or some other more subjective criteria. Regardless, it speaks volumes that Stewart received more votes than the established anchors he beat out.