THE STATE OF DIGITAL DOWNLOADS: THE VERY BEST "WARM HEART OF AFRICA" 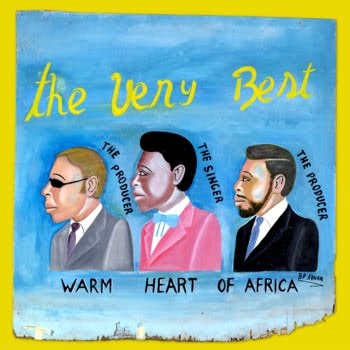 The much anticipated new album from The Very Best (Esau Mwamwaya and British production duo Radioclit) is now available digitally from Green Owl Records. The site includes the album download for a meager 8.99 and a full preview for those looking for transparency. I (and every one else on the web) have been alerting the masses to every single/download/leak for the past few months and for me personally, it has affected my opinion of the full-length and the music industry in general. Let me explain:

First, it's clear that, surprise, CDs are dead in the water (see below, courtesy of the NY Times) but digital music is still relatively new in terms of total sales and may have brought with it the demise of the quality full-length album. (people have been saying this for years) This sea change in format has obviously changed how music is distributed (songs are now sold individually) and perhaps less obviously, how it's marketed. Where singles had always accounted for a tiny fraction of the sales that full-lengths garnered, digital singles sales have now overtaken digital album sales (again see below). While this might not seem like a big deal, the focus of the music industry (which thankfully is diversifying) has seemingly shifted from selling full albums to selling singles or at least constantly marketing/leaking singles to hype album sales. Couple this with our new ability to cherry-pick tracks for download and suddenly, within the past few years the amount of songs per band/mc/producer in my iTunes has decreased dramatically (meaning I now have so many singles or cherry picked songs instead of full-lengths, if said bands/mcs even have a full length available)

So back to The Very Best album. It's a great album don't get me wrong, but I already had 8 of the 13 songs available (all legally and one is only a minute long so really it's 12) before its release and guess which songs are worth listening to? The best singles "Warm Heart of Africa" "Yalira" and "Julia" were all previously available for download and "Kada Manja" and "Kamphopo" were off last year's mixtape. ("Ntende Uli," "Chalo" and "Rain Dance" feat M.I.A were also readily available but not as quality as the aforementioned gems) So the album would have been FANTASTIC had I just heard all the tracks for the first earth-shattering time, but it's been broken up, "hyped" and exposed to such an extent that there can be no actual anticipation or realistic expectation of quality. That joyful moment when we hear an album for the first time as a cohesive piece of music with a beginning and an end seems to be gone. (for better or for worse) It used to be that we would hear one track before an album was released and you had to buy that ish. (tape singles represent) Today record companies put out half the album to hype it, but unfortunately there's usually nothing left to look forward to. (to be fair, the Sunset Rubdown album which was hyped/leaked like crazy is still awesome, but that's only because every song is quality. The new Big Pink album is not as fortunate)

With all of that said, digital music recording/distribution is cheaper, faster, more environmentally friendly and more readily available than ever so it's hard to get salty about the possible demise of the quality full-length album.

And yes, I realize that I often post new singles and contribute to the "hype." I can't help myself. (via Green Owl)