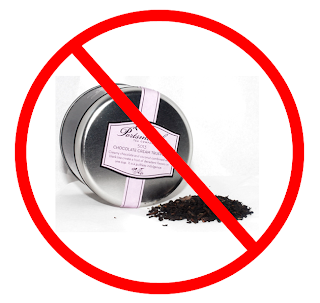 Now I won't get political too often here, (though my own blog is certainly the proper venue) but when a local business takes a very public, hard line on a political issue, they must expect local customers to draw the line as well. The Portsmouth Tea Company, which recently opened their retail location in Somersworth, NH (interesting choice), has joined a conservative protest of President Obama's policies called the Tax Day Tea Party. The company has donated over 70 pounds of tea to this cause and has advertised their efforts on their blog. Normally, I could care less about the political leanings of business owners, but as a former owner myself, I know better than to publicly mix one's business (and customer's money) with divisive politics. Not only do I disagree their "protest" but I would never allow my money to go to such a cause. What's worse, the owner of the company, Marshall Malone expressed some rather disturbing sentiments about the real culprits in the government's "wasteful spending". Read on (Full Article from Seacoast Online):

"Malone said he grew up in south Alabama near some very segregated areas and saw entire communities destroyed by welfare.

'Fathers didn’t need to work because the government was giving them a check,' Malone said. 'No one was teaching them to fish. They were just giving them fish.'"

Now please correct me if I'm wrong, but he seems to be insinuating that a certain race, living in the SEGREGATED SOUTH, are not working for a living but instead feasting on the free government "fish". As a participant in an anti-government spending protest, it's easy to conclude that Mr. Malone is claiming that African American welfare-abusers in the south are an important example of wasteful government programs (since he didn't mention any other "problems"). Beyond perpetuating a racist stereotype that African Americans don't work and/or receive welfare assistance, his assessment of the "problem" is completely backwards.

It is well documented that the majority of people using welfare programs are white: "Racist attitudes notwithstanding, it is a matter of record that White mothers receive more than half of the checks distributed under the auspices of the Aid to Families with Dependent Children program--55.2 percent, compared to 39.2 percent received by Blacks. Additionally, the U.S. Census Bureau reported in February that during an average month in 1990, 61 percent of major assistance program participants were White, compared to 34 percent who were African-American."

This all makes sense since African Americans make up only about 12.8% of the population and approximately 24% live below the poverty line. Whites make up approximately 80% of the population and about 8.6% live below the poverty line. So out of a population of 100 people, there would be about 7 poor whites and only 3 poor blacks. That's a ratio of more than two to one! Rather simplistic, but I think it disproves some long standing myths about poverty and race in the U.S. AND where the blame lies in Mr. Malone's theory about "wasteful spending".

Lastly, just because a very small minority of welfare recipients could be considered "abusers," doesn't mean that the entirety of the programs are in any way unnecessary or unneeded. Welfare programs (including Social Security) are safety nets for Americans and their children, who in uncertain times, may need assistance to survive.

In light of this information, please join me in boycotting the Portsmouth Tea Company.