PHOTOSHOP EVERYTHING REAL OUT OF LIFE. 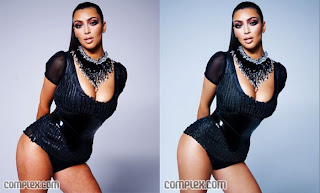 Let me start by saying, I don't gives a sh*t about Kim Kardashian. However, when I noticed this story on Gawker (don't ask) I couldn't resist weighing in. If you live in America (or an industrialized country), you shouldn't be surprised to learn that along with the pounds of make-up used on the models, there are also "changes" made via Photoshop that are also applied to images gracing the pages of several main stream magazines. They're used for a variety of reasons, but they become pretty obvious if you look at the before/after pics of Kim on the Complex website (the one on the left was removed), a mediocre street wear/hip hop/culture rag owned by Marc Ecko, maker of discount-store Marshall's exclusive label, Ecko Clothing. Anyway, the thought of an average or "normally" proportioned woman on the cover of any magazine is enough to applaud the inclusion of Kardashian in Complex (although that statement itself is pretty sad), but the fact that she's computer-lipoed should leave a horribly bitter taste in the mouth of American pop culture. As my sister just announced that her new baby is a girl (due in August), I can't help but imagine the brutal pressures that will be placed on her in only a few years to be "beautiful" in a way that pleases Marc Ecko and seemingly, the rest of America.

Note: I won't get into the fact that Kim's skin looks quite a bit lighter or should I say "whiter" in the new pic OR why her talentless self is in the magazine in the first place OR generally speaking how women are portrayed in these types of magazines and/or mainstream rap (not typically hip-hop mind you, but mainstream rap).
Posted by AVW at 9:12 PM