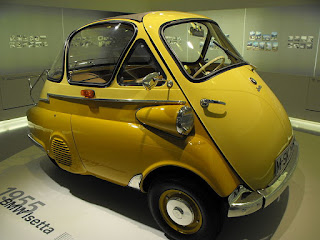 BMW began as a company making airplanes in 1916 in Munich, Germany. The iconic luxury car maker quickly switched to motorcycles after the Versailles Treaty demilitarized Germany in the early 20s after WWI. During the second world war, they returned to making airplanes, but shortly after it's end, they attempted to break into the auto industry. The result was the Egg Car, known formally as the Isetta, a tiny car with no more than a motorcycle engine to move it. Made in several European countries with slightly different designs, the car was exactly what fuel conscious people needed, more than 60 years prior to our current revolution in efficient car models. The best part? Gotta be the fact that the steering wheel is mounted on the door, which opens from the front.. despite the fact that you're dead meat and/or trapped in the car during an accident. Safety? Not the car's strong suit, but I'd take my chances if one fell on my doorstep and I could still fit in it.

When I was a youngster, I used to play in the backyard of my aunt and uncle's house in dirty Jersey. Behind the shed, and providing the best play space ever, was a BMW Isetta. It's flat tires were sunken into the earth and the red and white paint was barely visible above the rust, but the tiny car was completely intact and completely awesome (and sold to a collector who restored it). Growing up, I would be reminded of that car every now and again, in a design book or an episode of Family Matters (damn you Urkel), but most recently, the car is getting the recognition it deserves in the new BMW Museum in Munich. Observe.

I love the Eggcar! I have loved it ever since I saw the film "Funnyface" starring Fred Astaire and Audrey Hepburn, years ago as a small child, tucked in between my parents, getting to stay up and watch color t.v.!