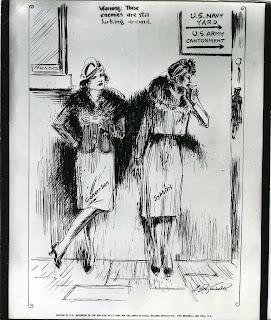 The National Museum of Health and Medicine is releasing and re-releasing thousands of pictures from various medical agencies from the Civil War (the earliest war-time pics) to the war in Vietnam (mostly WWI/WWII). You may recognize a few shots (especially if you teach history like myself) but the first 800 photos are captivating and have been archived here. The subjects range from the first airplane crash in 1908 (and subsequently, the first death from airplane crash), various prosthetics , propaganda, STDs, the body of Poncho Villa, frozen Native American bodies at Wounded Knee, Roman surgical tools from Pompeii, Amputations, early rhinoplasty, x-rays, medical oddities, etc. Some of the pics are a bit gory, but overall I'd say they're more interesting than disgusting and more importantly, they are a testament to the great progress we have made in the field of medicine.

The Propaganda Poster above is one of many warning of the rampant STD's during WWII (there are dozen of other posters as well in the archive). The one below is from the Civil War and documents the results of numerous amputations when doctors who, without antiseptics or knowledge of infection, hacked off limbs by the hundreds each day. If you were a lucky, injured soldier, the "doctors" might wrangle up some chloroform to put you out. Goodtimes.

P.S. I posted the CARDBOARD OFFICE blog TWO whole days before Highsnobiety got a hold of it. Just saying. 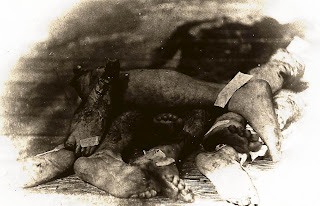