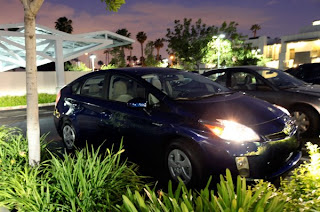 Earlier this year, Toyota released photos and details of the highly anticipated 2010 Prius (see website for press release). Although Toyota has clearly stated that the actual production car (due in "late spring") may vary from the prototypes on the road now, let me be the millionth person to say that they look damn good. The blue one pictured above in L.A. has better rims and assures us all that the future of green/hybrid cars is on solid ground. The new colors, roof solar panel and 50 miles-per-gallon fuel efficiency aren't bad either. (via Notcot and Toyota)

If you're in the market for the new hybrid, hold your onto your cashish for a few months longer and you may have another Prius model to choose from. Keep your ears/eyes open. 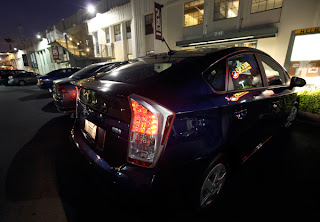 seriously, I'm thinking about sabotaging the focus so I can get a new ride this summer.