ONE HELL OF A DAY AT FENWAY 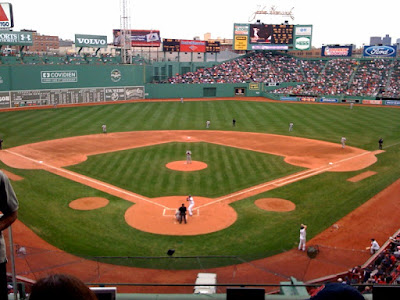 Rarely do I have a story worthy of a blog entry, but my trip to Boston yesterday surely fits the bill. My Wednesday started out with rain on Tuesday night, forcing the postponement of the Red Sox/Twins game to the following afternoon, 12:35. I was planning on heading to Boston anyway to return a few clothing items that didn't cut the mustard outside those damn dressing room lights and mirrors, SO I checked ebay to see how many ticket holders were unable to make the postponed game. As it turned out, there were dozens of people unloading tickets at half their face value. I bought a few printable tickets for seats behind Pesky Pole from a reputable seller (1300 sales 100% rating) for 50 bucks and went to bed (actually Katherine used her ebay account so technically...) The next morning, I parked in Brighton and my friend Ethan and I took the bus into town and walked over to Newbury Street to make returns, buy rain jackets and eat greek foods. Full of falafel and ready for the rains that were forecast for around 3 o'clock, we headed to the park. Arriving at gate C, we presented our printed tickets to the taker and heard a sound quite different from the previous beeps that accompanied our line mates. “Head to customer service around the corner” was our only direction. Five minutes later, a young customer service rep explained that our tickets (copies of tickets really) were already being used by someone in the park. I think I said “hmmm” and that was about it, what could I say? The rep said he would mail the printouts back to me so that I might get my money back from the ebay seller. So we left the customer service down two game tickets and possibly 50 bucks. We quickly decided we'd check the ticket window around the corner just to see what might be available. As we approached the roped line waiting at the window, a hand shot out in front of us, stopping us in our tracks. We turned to wait for whoever it was we cut in line, or for the line to accept new members again; we had no clue why we were being stopped and weren't pay too much attention after the bad news about the tickets. Then we heard the line attendant ask “are you guys buying tickets?” and directed us to the young man and his son standing next to him. “I have two tickets to the game, do you guys need tickets” he asked.
“Definitely, how much do you want for the tickets?” I excitedly questioned (this is my best recollection).
“I want to give you guys these tickets, we have two extra. They're decent seats.”
As the four of us walked into the street, I asked again, “Awesome, what can we give you for the tickets?”
He told us that he sometimes gets tickets from the Jimmy Fund and we were the first people he saw that needed tickets and again, that he wanted to give them to us. It was then that I noticed the thinned hair on his young son and that this indeed was no joke, con or attempt to make money period. Nor could I feel exceptionally lucky at that moment, considering where the tickets had come from and why they had them. Still, it was amazing that they had decided to share the tickets with us, total strangers off the street. After continually thanking Mark and his son Mason with hand shakes and high fives, I briefly explained our situation with the Ebay tickets and he was satisfied that he'd found the right people. 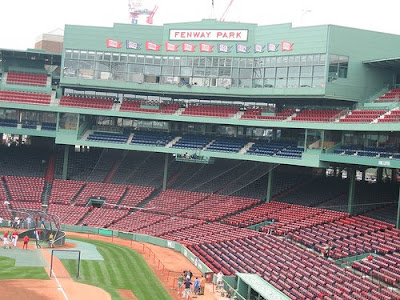 Of course, I'd never heard of the EMC Club or where it was located in the park. Mark had mentioned the seats were behind home plate so we knew they were pretty good seats, but damn, they turned out to be amazing. The club is an upscale restaurant and enclosed box seating area just above home plate (the screen and net behind the plate lead literally to the box. Check the pic, it's the area with the blue seats). The seats? Padded. The beer? Delivered. Rain delay? The roof, heated vents and thirty televisions made it quite enjoyable. Even the napkins were fantastic. Mark and Mason clearly enjoyed themselves as well, though Mason got pretty tired half way through the game and they left. After the best four innings of baseball I've ever experienced, it was a grim reminder of the events that brought us all together in those seats. Before they went, I gave Mason a high five and he laughed and put his hand down so that I could give him a low five as well. I went to slap his hand and he pulled it away for the famous “too slow” portion of the routine. Except, I didn't see it coming and I was actually too slow. It was pretty damn funny, not in that “end of the sitcom” cheesy-happy way, but in a goodtimes, uplifting way. Trust me, those moments aren't cheesy when they actually happen to you.

During our time with Mark and Mason, I asked several more times if there was anything we could do for the tickets, wanting desperately to pay him back for the tickets and the tragedy that is cancer. He said, “Whatever god or allah or buddah or whatever you pray to, pray for my kid.” That I could do. I also donated 50$ to the Jimmy Fund. For the record, I'm a cancer survivor myself (though it was very easily treatable) and so is my father (much less easily treatable) so I didn't necessary have to imagine the gravity of the situation. My experience at Fenway yesterday was another uplifting example of the human connections, positivity and generosity that tragedy inadvertently creates. And I will remember it fondly.

Just to show me that luck and life worked the other way too, the highways of Massachussetts kept me from my soccer game by extending my drive home to two hours. 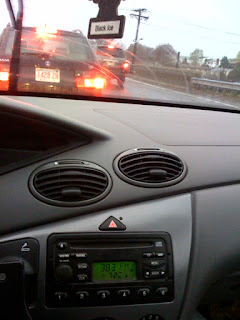 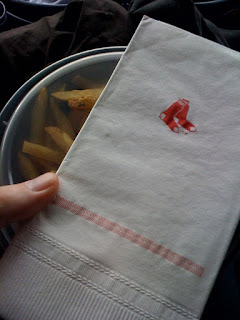 (All pics are mine except the view of the club from the field taken by Pete Kim)
Posted by AVW at 2:17 PM

Beautiful post Andy. Full of heart and you! I will add your friend Mason (and his father) to my daily prayers and wishes.<3 jbp