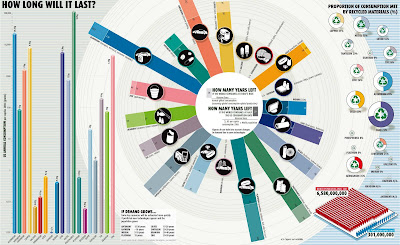 Cue the Debbie Downer music: Wah-WAAHHHHH. This past decade has brought significant discussion about our finite source of oil on earth as well as how we will accomplish the necessary adaptations in finding sustainable energy. According to respected British science magazine, New Scientist and German scientist Armin Reller (University of Ausberg), there may be even bleaker news about the earth's mined resources and the impact on the consumer products we manufacture. The essential elements mined all over the world (see second image) are running out at an unbelievable pace (see first image). These elements include copper, indium, silver, platinum, phosphorus, gallium, zinc, tin, lead (and many more) and are used to produce items from computers, cell phones, tv's and electronics to cars, solar cells, jewelry, medicine and pipes/cables... basically everything. For example, indium, a necessary ingredient in LCD televisions, computer screens, cell phones and solar cells may be gone in only 10 years. The increased demand and declining supply is evidenced by a sharp rise in price over the past few years to well over $1000 per kilogram. While it is assumed that we will, in the next 20 years, find renewable energy sources and harness them, our ability to manufacture necessary goods will quickly become more and more difficult and expensive. Read the whole article here from New Scientist Magazine and Nova.

I'm sure it's obvious to everyone that the important elements we take from the ground are indeed a finite source and regardless of how long they last, they will at some point run out. We may not think about this because of the debate over the energy source that will drive our future production, but do not underestimate this potentially disastrous problem with the necessary production materials. Now, the article I cited is almost two years old, so it's obvious that we all (myself included) slept on this one. It will take a serious effort in recycling these elements and again, finding renewable sources of materials to guarantee the future of the U.S. and the world. (via Gizmodo, New Scientist) 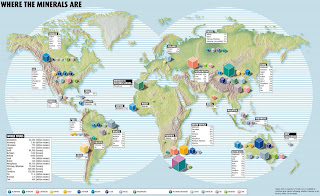