It has often been suggested (and clearly ignored until recently) that a healthy lunch and a comfortable, friendly environment will improve student production and behavior. I eat 5 "meals" a week in a high school cafeteria, constantly choosing the lesser of evils in a sea of brown tables and speckled tile floors. Luckily, I don't have to actually eat in the cafeteria, (though arguably, the teacher's room atmosphere isn't much better) but the students who do would clearly benefit from a change of scenery and nutritional content.

Enter the School Food Trust, the British answer to childhood obesity and poor nutritional content/taste in food. Their latest project was the overhaul of the Applemore Tech College (the equivalent of a U.S. high school) cafeteria in Southampton, England. It is, dare I say, the most handsome place to eat a high school has ever seen and the school says it has had a visible, positive effect on its students. The change was extremely inexpensive as well, at a total cost of approximately $85,000. Obviously, not every school in the U.S. will be able to duplicate this type of design in seating (due to student population and space), but the atmosphere (colors, walls, etc) could easily be matched at a minimum cost to the school.

The quality of American school lunches is another matter entirely. Change is coming, but it has been extremely slow. Pizza, ice cream, chips and several high fructose drinks are always available at my school and while I'm not sure it's been proven, lets just say our students' productivity, behavior and health are not what they could be. There are great examples of U.S. schools making the change to healthy, fresh school lunches, but largely, it hasn't happened yet. Schools often argue the costs (both costs of fresh products and loss of sugary sales) of improving the diet of school aged kids would be too high. If this continues, the rising cost of health care, poor scholastic performance and discipline problems/incarcerations will be an unaffordable price to pay for America's future. (Not that I'm suggesting that's the ONLY thing that needs to change). 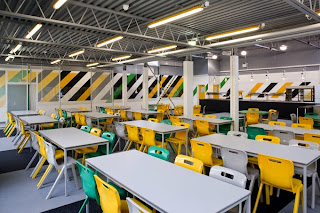 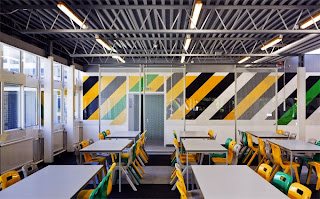 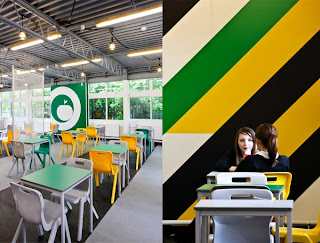 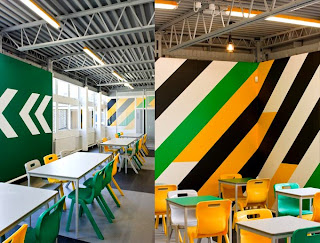