Canada may not be known for its film making (outside of comedy anyway), but Murray Siple's hour-long documentary may turn that reputation on its head. Carts of Darkness is an insightful story of homeless bottle collectors (Canada's recycling program pays pretty well actually) who bomb hills in their shopping carts. These aren't stupid "jackass" style stunts, but a unique lifestyle choice and a desperate attempt at meaning and happiness. However, as these guys hit 45 mph riding shopping carts down some crazy hills, the visuals get pretty intense. The movie, shown for free on the National Film Board of Canada site, recently won a Leo Award for best documentary film and also includes some fantastic music from Black Mountain, Ladyhawk, Vetiver, Bison, and Alan Boyd. Perhaps Jonathan Orr puts it best:

"Murray Siple's feature-length documentary follows a group of homeless men who have combined bottle picking with the extreme sport of racing shopping carts down the steep hills of North Vancouver. This subculture depicts street life as much more than the stereotypes portrayed in mainstream media. The film takes a deep look into the lives of the men who race carts, the adversity they face and the appeal of cart racing despite the risk. Shot in high-definition and featuring tracks from Black Mountain, Ladyhawk, Vetiver, Bison, and Alan Boyd of Little Sparta." 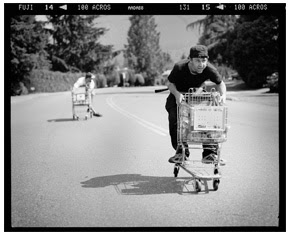