Thinking green is not a new concept, however with pressures on the world (and to a large extent, the United States) to quickly clean up its act, the intensity with which people are evaluating our carbon foot prints has increased just as fast. It's about time people are looking into the impact of even seemingly insignificant tasks performed dozens to hundreds of times by your average American everyday. Google has been feeling this heat recently as Harvard scientists computed how many grams of carbon dioxide were generated by a single search on the leading engine. The massive server farms and technology necessary in the process creates 7 grams of CO2 in each search. Obviously, considering the hundreds of millions of Google searches that occur every day, this does indeed have quite an impact on our environment (or it will in the future anyway), but how does it compare to the other tasks we perform or the products we consume?

To prove how eco-friendly Google really is, their scientists have created a comparison of CO2 emissions by Google searches to those of print newspapers, beef and even orange juice. (see below) Since newspapers are currently transitioning to online websites, I'm not sure it makes a whole lot of difference, but it would take 850 google clicks to equal the 6,000 grams of CO2 they produce per paper.

It's still a bit surprising to see the environmental impact of something as simple as clicking your mouse, but look at how many clicks it takes to equal just ONE cheeseburger (15,000!). It's no secret how incredibly inefficient it is to raise cattle for beef, but to see that EVERY CHEESEBURGER creates more emissions than 5 miles of driving is astounding. As is the 3 MILLION clicks it would take to equal the CO2 created from only one month of electricity in the house of an average American. (via TechCrunch) 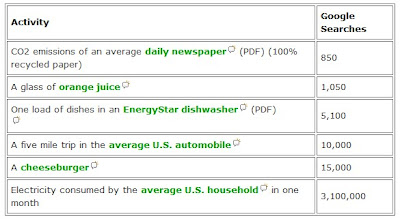 see? it's like I have been saying: go vegan and love google.