THE FOG OF WAR: THE FIREBOMBING OF JAPAN BEFORE THE ATOMIC BOMB

Recently, I've been involved in several discussions about the motivations for the dropping of the atomic bombs on Hiroshima and Nagasaki in 1945 and whether or not this was a necessary course of action. In addition, my students are studying this controversial subject in my U.S. History class, but helping students (take on Truman's role) make one of the most difficult decisions in human history is a daunting task. The problem is that our textbook (The Americans, 2001) contains NO information about the 7 month U.S. fire-bombing campaign in Japan that destroyed 67 cities, killed more than 500,000 people and displaced 5 million. The fire-bombing of Tokyo alone claimed the lives of over 100,000 civilians in only one night and remains the highest death toll of a single bombing raid in history (neither Hiroshima nor Nagasaki individually killed as many in their blasts.. death from radiation sickness is another matter however) In order to provide the proper context for students (or anyone) to form an educated opinion on the subject, it is necessary to include this rather important information especially considering the arguments for dropping the bomb rely on the speculation that its use was absolutely necessary and had to be done immediately. Because of the unprecedented amount of civilian death and devastation involved, it might not come as a surprise that our textbooks would avoid any events or ideas that might counter those notions. For a decent account of the two sides of the coin, click here.

Enter Robert McNamara, one of the most heavily discussed figures in modern American history for his role in the Vietnam war as the Secretary of Defense under JFK. In the oscar-winning documentary, The Fog of War (2004), he reveals not only his part in the cold war, but also his role in the fire-bombing of Japan before the atomic bombs were dropped. McNamara regretfully discusses the importance of proportionality in war, the massive destruction that he helped create in Japan and the dropping of the atomic bombing:

"[I]n order to win a war should you kill 100,000 people in one night, by firebombing or any other way. LeMay's answer would be clearly 'Yes' . . . Proportionality should be a guideline in war. Killing 50% to 90% of the people of 67 Japanese cities and then bombing them with two nuclear bombs is not proportional, in the minds of some people, to the objectives we were trying to achieve."

Note: He also says he doesn't fault Truman so McNamara does not present a one-sided argument either.

The film includes a moving montage of the names of the bombed Japanese cities and their U.S. equivalents that flashes ever faster over the images of burnt debris. Here are the cities in an easily digestible format:

Also strangely absent from our texts was the advance of the Russian army through Manchuria in preparation for an assault on Japan (this is addressed briefly in the recommended reading above). A few more questions for debate: could the bombings (plural) possibly have been the only way to get the Japanese to surrender? What role would the Russians have played in the political rebuilding of Japan if they had been able to invade Japan themselves?

While I'm not trying to convince you (or my students) that the bombing was not justified or unnecessary (or the opposite either), I am trying to provide information (that typically is left out of the argument) that makes the debate infinitely more interesting and the decision somehow even more difficult. Regardless of your position, we must all recognize the importance of Truman's actions and it's impact on world history forever. I assure you, the Japanese will never forget. 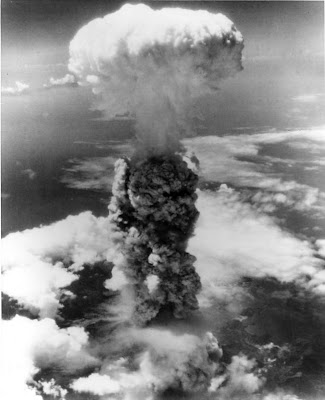 As always, great article.
I saw that film when it came out, but should probably rent it again.