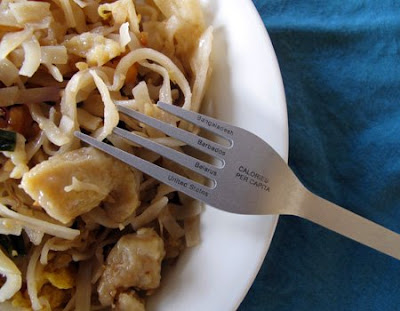 Statistics and/or information, no matter how shocking or significant, may seldom impact potentially harmful human behavior. Not even if we wish it were so. However, that will never stop us from trying to influence others with regard to the issues we hold dear and it will never stop the occasional message from seeping in and perhaps, changing history and lives. Nadeem Haidary is one of "us" and his influence can be seen IN the products he designs by creating physical information that we use as constant reminders in our daily lives. He calls this product line In-Formed and the concept, while not totally original, is surely another great marketing tool; be it for business or activism. Of course, the downside to marketing (other than not knowing what techniques really work) is that even if the message were in our hands daily, we would eventually become numb to it and would require some other, more "in your face" type of marketing to break through the ever growing clutter. I don't even want to imagine what that would be.

In this particular case, the design is meant to educate people about the massive daily amount of calories Americans consume on average (over 3,500; healthy is approximately 1800-2300), compared to the rest of the world. I recently began to scale back my food portions (and thus calorie intake) because I'm turning into a fat bastard, so I would appreciate a reminder like the one found on the fork Haidary has designed. I must say however, that while the countries/intakes listed on the fork are worthwhile, there are far too many under-developed nations that on average, consume less than 2000 calories a day (too many of them in Africa) that should be included on other models. I and Haidary are also concerned about the resources used to create food (especially meat), which would obviously go down with consumption, but clearly a fact lost on most Americans and certainly not a message supported by U.S. industry (and yes you, McDonald's and BK). So essentially, green= consuming less food and/or foods that require less processing.

Looking at the fork, I'm a bit weary of that U.S. prong, as that thing would no doubt, end up a quarter-inch deep in my gums if this product ever existed. And for me personally, why even make the U.S. and Europe plates? I need the Africa plate seven days a week. (yes, I understand why he includes these plates in the collection, and no, I'm certainly not trying to trivialize this) 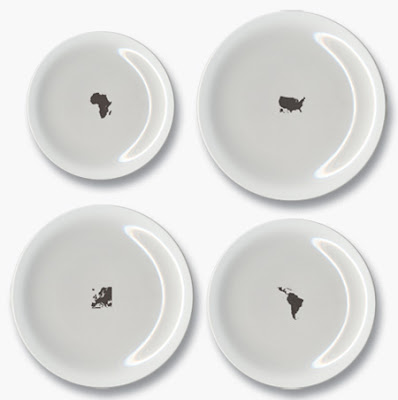