ESPN has produced a tribute to Ed Templeton, one of the most influential skaters/artists/business owners ever. Of course I have a few thoughts on the subject:
1. Ed always was/is awesome and he deserves the recognition. Also, Toy Machine is a skateboarding institution.
2. ESPN has a skateboarding blog?
3. Apparently, ESPN is so convoluted that they think they have the credibility to be covering artists from a skateboard community that for most of its past, aggressively rebelled against companies like ESPN who only wanted to be involved to make a buck. (For the record, ESPN is a fantastic station, but they have no legitimate connection to skateboarding)
4. Skateboarding is not a sport. A sport is defined as a physical activity that is governed by a set of rules or customs and often engaged in competitively. There are no rules in skateboarding and it shouldn't be judged.
5. I admit, I love Sportscenter.
6. ESPN wishes they were Vice and this interview was an Epicly Later'd episode. (EL is the best)
7. The narration is a ghastly attempt to make Ed/skateboarding sound "extreme".
8. Trying to inject the "competition" in skateboarding, the producers try to hard to paint Ed as a competitor in his time on the "contest circuit" in the early 90's. (he won two contests and at that point, they were TINY, jokes of a competition which is how it should be)
9. Mike Vallely is an embarrassment (Afflicition MMA clothing? Mighty Ducks?), but thank God, Allah, Vishnu, Buddha they mention Gonz and Natas for cred.
10. Sheep shoes/1997/animal-free represent. (SoleTech bring that sh*t back)

ESPN, this interview is simultaneously awesome and horrible at the same time, but thanks for giving Ed his due in proper. 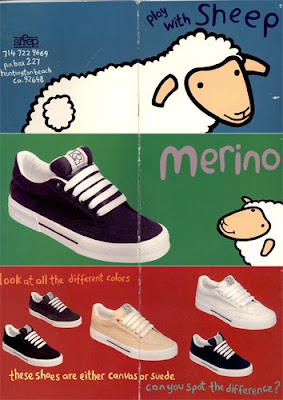 I've still got my old Ed deck. I know that it was signed by Jamie Thomas, but I can't remember if it was Ed or some other dude that also signed it. Have to venture back to Ruth's and find out.

Those were the days for sure. Wish I had kept ANYTHING from the early-mid nineties. Those old Toy Machine decks and videos (and New Deal, Blind and Plan B) will be our generations's equivelant of the Powell Peralta, SC and Alva boards.. except that I'm old enough that I had a Hawk board in 87'. If you got it signed at the demo in Portsmouth, I think that was 1995? That's a keeper for sure.

I think that the weirdest thing about all of that is that you actually searched to find that ridiculous Mike V crap.................on a better note first real complete was probably 87' it was a hawk board with tracker truckers and slimeballs that were massive. you bet it had a killer grip job!

Good point Matt. Almost to a fault, I always have to provide support for my opinions and I remembered seeing that video on another blog.. unfortunately for us all.

Its kind of a shame that they would give so much credit to him when they did, as Transworld just gave Hosoi Legend of the year... Just another case of a big company not doing their research before jumping into something they're not so sharp on.