The highly anticipated documentary Food Inc. premiered this past week in New York City to rave reviews and is set for limited release this Friday the 12th. I'll let the press release handle the details (below) but the potentially revolutionary film includes commentary from my favorite notable expert Eric Schlosser (Fast Food Nation [life-changing], Refer Madness [must-read] and Super Size Me fame) even though his appearance on the Colbert Report was mostly lackluster. The Official Food Inc. site includes an incredible amount of information on healthy eating, the environmental impact of foods, chemicals and nutritional labeling as well as a blog and recommended reading.

"In Food, Inc., filmmaker Robert Kenner lifts the veil on our nation's food industry, exposing the highly mechanized underbelly that has been hidden from the American consumer with the consent of our government's regulatory agencies, USDA and FDA. Our nation's food supply is now controlled by a handful of corporations that often put profit ahead of consumer health, the livelihood of the American farmer, the safety of workers and our own environment. We have bigger-breasted chickens, the perfect pork chop, insecticide-resistant soybean seeds, even tomatoes that won't go bad, but we also have new strains of E. coli—the harmful bacteria that causes illness for an estimated 73,000 Americans annually. We are riddled with widespread obesity, particularly among children, and an epidemic level of diabetes among adults.

Featuring interviews with such experts as Eric Schlosser (Fast Food Nation), Michael Pollan (The Omnivore's Dilemma, In Defense of Food: An Eater's Manifesto) along with forward thinking social entrepreneurs like Stonyfield's Gary Hirshberg and Polyface Farms' Joel Salatin, Food, Inc. reveals surprising—and often shocking truths—about what we eat, how it's produced, who we have become as a nation and where we are going from here."

The site also includes the Hungry for Change Cafeteria which showcases some of the necessary changes that need to be made to school lunches (a subject I have addressed before while introducing The School Food Trust) Also, please sign the petition to reauthorize the Child Nutrition Act. 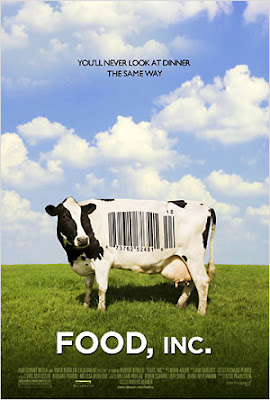 Thanks for posting this! I really liked The Omnivore's Dilemma and this issue is always top of mind. I'm sure Food Inc. will end up next to Supersize me on my DVD shelf.

I'm scared to see this movie, yet I know I must.