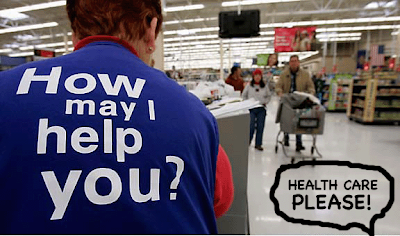 In an ironic twist of fate, retail behemoth Wal-Mart has unexpectedly cast their support in favor of a mandate that requires American companies to provide health insurance for their workers. Say Whaaaaa? Yes, Wal-Mart, who for years railed against such a mandate and encouraged employees to use state medicaid programs instead of providing it themselves (along with SEVERAL other ethical/environmental concerns) is now working with the Service Employees International UNION to require insurance for their previously underpaid, sometimes undocumented, never unionized, sometimes discriminated against, still-waiting-for-their-overtime-pay employees. The support is a huge boon for an Obama administration trying to cover the remaining uninsured 50 million Americans by lowering health care costs and providing a government-run insurance plan to compete with private insurers. The health care reform legislation (the issue of raising the funds is still up for discussion) is currently being drafted and may see a vote this summer.

In an equally strange move, a new McDonald's restaurant in Cary, NC has included an electric motor charging station in its parking lot for green customers. Perhaps even stranger, this was not their first electric car charger (Arizona late 90's). According to Pike Research, there will be over 5 million charge points for electric vehicles in the world by the year 2015. That same McDonald's, set to open July 14th, was constructed using a wide-range of recycled materials. In the U.K., they recycle their vegetable oil into bio-diesel and this year, all stores began using fish from sustainable fisheries (fish make up only a tiny percentage of sales). McDonald's has also participated in setting a ban on using cattle feed from soy grown in recently deforested areas.

While the sudden and dramatic shift in ethical/environmental policy by these companies is impressive, rest assured the changes have almost nothing to do with providing health care or saving the planet and everything to do with making money off the increased market share they will surely secure with the progressive label they hope to garner. Wal-Mart isn't as concerned with insuring their employees (or they wouldn't have been one of the worst at doing so for years and years) as they are looking to boost their image for providing health care that may cover all their workers, but with health care costs dropping, won't cost them much at all in the end. The goodwill they'll get should bring in a new customer base (myself not included) that may have previously criticized Wal-Mart for a variety of valid reasons.

So could McDonald's and Wal-Mart be the new progressive leaders of the corporate world? Definitely not. Both companies still have arguably two of the worst environmental/ethical records out there (especially the massive use of resources to make beef for McDonald's). This isn't surprising, typically, larger, more established companies in the U.S. are understandably slow to change (change comes at a huge price sometimes) and will only do what they must to stay competitive and achieve efficiency while keeping costs at their absolute lowest. It is usually the smaller, younger businesses that drive the push for ethical and environmental progression since they are smaller, easily-changed operations and will take chances on different markets to try to compete with the more established companies. Sometimes they even do so because they feel a responsibility to reduce their carbon footprints and benefit people in ways other than providing products, but obviously, these changes can be profitable too. Improving their green/ethical public relations (even slightly) is the perfect play for large companies like Wal-Mart and McDonald's and while these corporations make these changes to increase efficiency and/or bring new customers and ultimately, to make money, it certainly is an improvement for the world. Hopefully they'll keep going, they've got a lot of work to do.
(via Hybrid Cars, The Boston Globe)
Posted by AVW at 5:14 PM