When done well, street art sneaks the beauty of the canvas/gallery and all its ideas and conviction into the lives of masses. NYC inhabitant Gaia (the embodiment of Earth in Greek and also the name of scientific theory concerning the inter-connectivity of the Earth's physical components) is featured in the above video wheat-pasting the crap out of a cinder block wall in what has been a busy year for the gallery/street artist. Directed by Nicolas Heller and featuring Diplo's newest project Major Lazer, Gaia's prints bring some of nature's creatures (mythical and otherwise) to society's unsuspecting eyes to create something he says is "more beautiful than what I have found in this daily life. Groping at something romantic that I have not yet located where I currently am." Perhaps as important as the image is the placement and Gaia's choices use space and location very effectively. Again, he states it best:
I feel like one of the most important responsibilities of artists who consistently get up in the streets is to forge new frontiers for spots. Finding a beautiful setting to apply the work that is in a neighborhood where Street Art is not generally found is important for a few strong reasons.
Firstly, whatever the piece is, by putting up work that goes beyond the usual areas where it is to be expected, the artist strengthens the collective body of street art and extends its limits. It essentially serves as an outpost for others to venture forth from. It radiates new work in an unfamiliar landscape and enhances itself with reinforcements as other people use it as a base of reference for spots.
Secondly, I feel that its impact is significantly heightened and accentuated when the work is encountered through coincidence. It becomes arresting in that moment of intimacy and such a situation of beautiful discovery that is ignited between the piece and the pedestrian is not as readily established if the viewer is anticipating the experience because it is in a setting like Williamsburg. In a new and more distant place, the work becomes more mysterious and autonomous.
Thirdly, it changes the artist as they become shaped in their exploration of the surface of neighborhoods and become familiar with novel terrain. It puts the artist in the uncomfortable experience of drifting from the nest and into a place where their individual voice and art must be asserted confidently. A practice of finding spots that are in the cut confronts the artist with other realities of lifestyle and culture. It is like visiting a new country in the very city that you thought you knew.
(via NotCot) 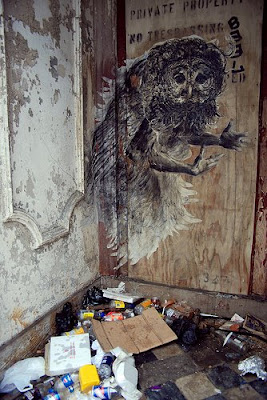 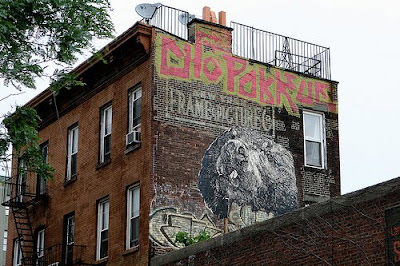