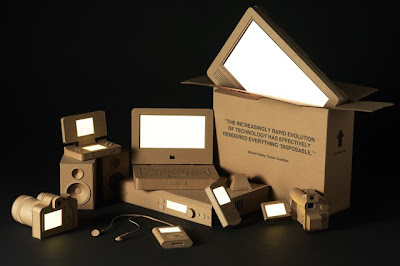 As technology capabilities continue to progress at an incredible pace, the "life span" of tech products get smaller and smaller to the point where they are, in a sense, disposable. Kyle Bean has created his own Disposable Technology in the form of cardboard sculptures of popular electronic devices. Carefully crafted, each piece is made (approximately) to scale and even includes a seemingly bright screen. At the center of the work is a quote from the Silicon Valley Toxics Coalition, a San Jose-based group that promotes responsibility in electronics recycling, The increasingly rapid evolution of technology has effectively rendered everything disposable. The importance of the quote of course, isn't that things are used quickly and replaced, it's what happens to them after they're replaced. While I/we enjoy our tech conveniences on the daily, they unfortunetly are not made of cardboard and producing/disposing of them has had a tremendously damaging effect on the world's environment. 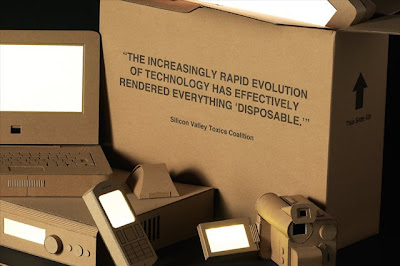 We call this "e-waste" and half of it is made up of electronics such as computers, monitors, printers, televisions, dvd/music devices, stereos, and cell phones. In the United States, a dismal 10-20% percent of electronics are recycled responsibly (depending on who you talk to) and Europe doesn't fare much better at 25%. (see below chart to see where the waste comes from and where it goes) This means 80% of the roughly 50 million tons of e-waste will be either burnt or put in landfills, allowing the hundreds of different dangerous chemicals (including lead, mercury, cadmium, etc) found in electronics to leak into the water or air. Much of the waste (computers) is sold to developing countries to be sold as is (they will still end up as waste at some point) or stripped to extract and sell the rare elements and materials used in the electronics. There is currently no U.S. law to curb or regulate the export of e-waste to countries in Africa and Asia and the E.U. laws (under the Basel Convention) are obviously not being enforced. We need federal legislation to make sure that A. the environment/world population is protected from e-waste's harmful chemicals/materials. B. to re-use the rare elements and materials that will disappear from the earth unless we learn to recycle them effectively and C. that recyclers actually do what they promise, because surprisingly, even groups that claim to recycle these devices responsibly have been found to export them to developing countries. A fantastic story by 60 minutes reported that 44 recyclers were simply exporting the e-waste overseas and according to National Geographic, even Goodwill has sold computers to Ghana.

If you have electronic/electric waste please contact the E-Stewards Initiative to find a local recycler and/or the manufacturer (Dell, HP and Apple all have recylcing programs) to find out how to properly recycle the product.
(via Design Boom, CNN, SVTC) 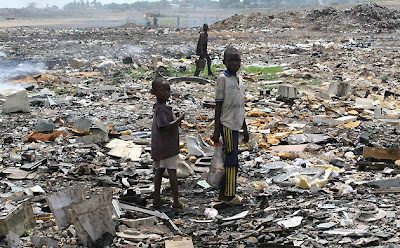