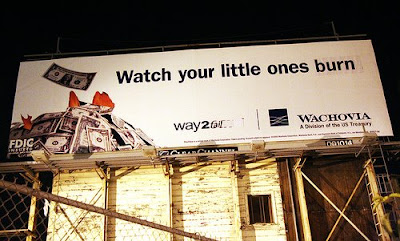 Ask and ye shall receive. A few weeks ago I weighed in on President Obama's proposed credit card reform bill and what it meant for consumer protection in America. Like many Americans, I suggested going further and creating a government agency that protects consumers:

"Hopefully, this is the tip of the iceberg in securing consumer rights in a capitalist system that obviously thrives on wasteful spending and then abuses most of those who spend. Consumers must practice restraint and responsibility in spending, but I see increasing difficulty in young people's ability to do so considering the status and prestige assigned to the products/services they are almost required to buy in our society. I still feel that there should be a department of consumer affairs in the president's cabinet to represent the people/consumers instead of the current agencies that seem to only represent the interests of the American business. "

Well, it seems the President is listening (not to me, mind you). CNN has reported that tomorrow (6/17) he will make the official proposal to create the Consumer Financial Protection Agency, a presidential appointed commission that will have broad powers to ban abusive "anti-consumer" practices in financial sector (Credit, loans, banking). Whether you agree or disagree (and if you're in banking or CC's you most definitely disagree) this is an inspiring example of a President who has the sense to listen to the will of the people and act accordingly. AGAIN, IT'S ABOUT DAMN TIME.
Posted by AVW at 8:09 PM